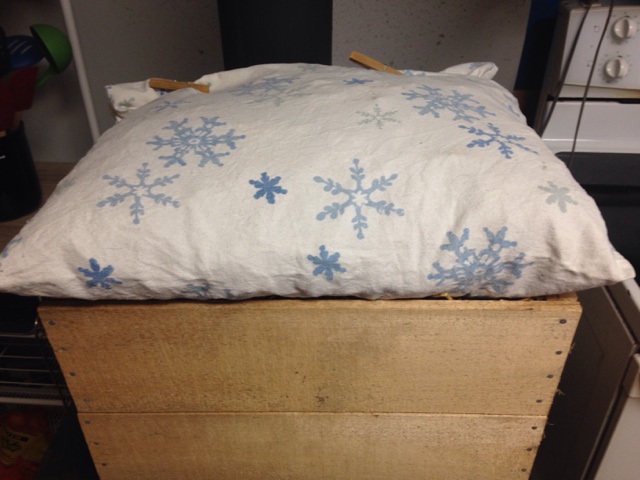 Hay boxes are a marvellous way to slow cook food and save 75% of your fuel. They've been around for a long time and are just one way people have used insulation from earth or other sources to slow cook food. Simply put, you boil your ingredients using whatever heating method you have and then you cover your dish or pot and place it in an insulated box and leave it go continue cooking using the stored heat. My method is pretty simple. I sauté the meat for a few minutes and then turn off the heat and add the onions. They cook slightly as the pan cools. I then chop the rest of my veggies and add them to the pot or dish along with either stock or water and seasonings and I turn the heat on again. Once it's come to a full rolling boil for 5-10 minutes I turn off the heat, put on a lid, and place the pot inside my hay box which is on a level surface. A recent addition to my kitchen was a Pampered Chef Rock Crock. Its a pot that feels like stone but is safe to use on the grill, stovetop, oven and microwave. When using the Rock Crock I bring it slowly to a boil over medium heat so that the Crock has a chance to heat up. I'll leave it to simmer for 5-10 mins before I tuck it away in the hay box. The box can go anywhere that's not in your way. I cover it and then just leave it for hours sitting on the floor or counter.  The heat of the pot and food stays trapped and slowly finishes cooking resulting in veggies that keep their shape and meat that turns soft and delicious, all with no need to keep using power or fuel to cook it. Because there's no outside source of heat you don't need to worry about keeping it away from things that will melt like you do with a traditional slow cooker and it doesn't need to be by an electrical outlet. There's no reason why you couldn't have a good tightly fitting lid on your box then pack the whole thing into the car, go for a hike and return to a hot cooked meal trail side. 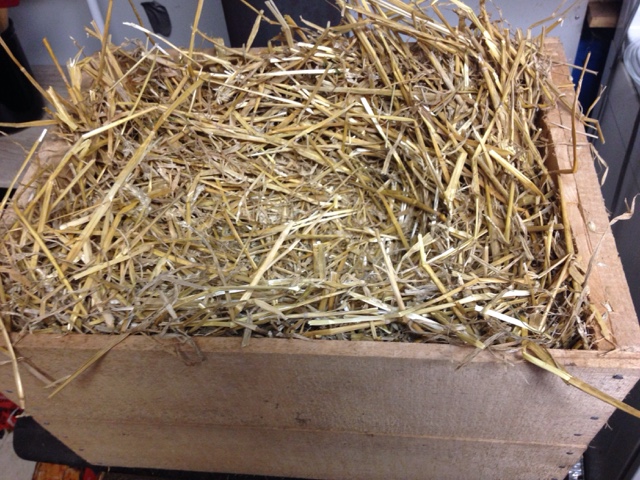 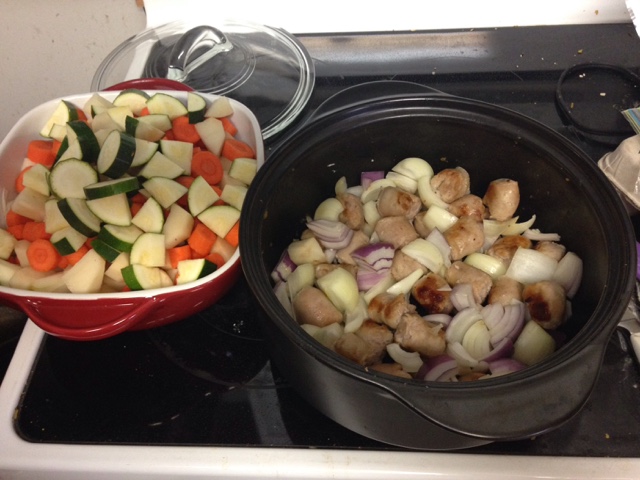 My small hay box is simply a wooden crate lined with straw and covered in a pillowcase also filled with straw. I like straw because it's hollow stalks are good insulators and it saves hay to be fed to animals. I have an old pillowcase that's filled with straw and closed with a couple of clothes pins. You can use hay, straw, ground corn husks or whatever you've got.
Ok so my pot is now in the hay box. I must admit that I couldn't resist lifting the pillowcase after a few minutes and the Crock is still simmering away. Perfect! Cooking with no added heat. 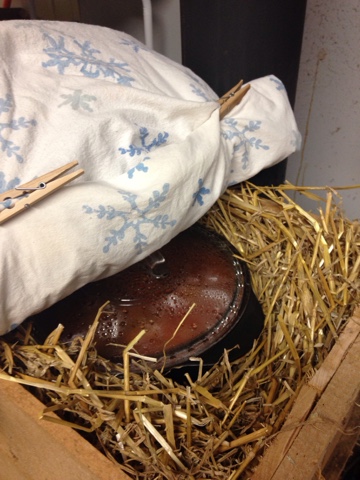 Update: Dinner was delicious. I'd use a little less water next time because there's no loss like there is from regular cooking methods so it doesn't cook down. Giving the meat time to soften and mellow was a great idea on the cheap blade roast I cut up the second time I used this method. It works to cook stew best rather than a whole potroast, but the money saved by buying cheaper cuts and slow cooking is worth it. Also the slow blending of flavours was wonderful. I think it's why stew tastes even better the second day, the blending of flavours. This time I also added bouillon cubes, tomato juice, pepper and Italian seasoning and it was so delicious we all sopped up our bowls with fresh crusty bread. Sigh. Yum.
Posted by Elizabeth Faires at 1:38 PM