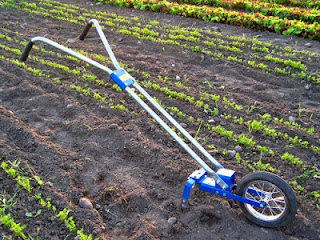 I think that farmers should invent tools for farming...don't you? Not engineers. It's only when you actually use something that you get to know all the little things that make it either an ok tool or a great one. Having said that, Steve and I are looking at getting a wheel hoe as you know. Prices vary from $130 to well over $700. And since we're farming on a budget, Steve did some internet research, asked me some questions, went to Canadian Tire for angle iron and now is happily making a prototype in the driveway. He's basically making a platform attached to a wheel and pushed along by 2 handles made of conduit bent in our pipe bender. Now he's making a cultivator blade that will attach to the bottom of the platform. I know it's hard to explain but I will get a couple of pics uploaded once he's finished it tomorrow. It may not be pretty...but it's cheap! Probably by the time all is said and done we'll have a working unit for under $50. I'll let you know. Here's a picture of a wheel hoe, ours won't be so pretty but it's a tool that's going to save us time and labour and will be very well used so I don't really care what it looks like. Steve jokingly said that if it turns out really well he'll make you all a kit that you just have to bolt together and you can buy your very own cultivator for $59 + shipping. Maybe he's on to something, but first we've got to try it out! We'll of course let you know how it goes.

Things in the garden are fine. Not much happening at the moment. The chickens are growing and hopefully we'll have some veggies growing soon. The lettuce and zucchini are taking their time but are putting a bit of growth in this warm weather, the loofah's are ready to go into the ground, and the Tiny Tim tomatoes we've got in pots at home have several flower clusters each which is great. The bees seem happy and that's about it for today. Gave everything a good soaking to tide it through the next few sunny and hot days. I just have to water a patch on the side of the house tomorrow morning and I'm done watering here at the house. I like to water very early in the morning if I can. It gives the roots time to suck up the water before the sun dries everything out, but the leaves don't stay wet for too long and encourage mould. Without the sun up it does mean less water evaporates so it's more efficient to conserving water too. But the biggest conserver has to be the soaker hoses because they only put the water where we want it and they work well on a low pressure system like a well.

Happy Father's Day to you all for tomorrow.
Posted by Elizabeth Faires at 10:21 PM

Email ThisBlogThis!Share to TwitterShare to FacebookShare to Pinterest
Labels: hoe, save water, tools