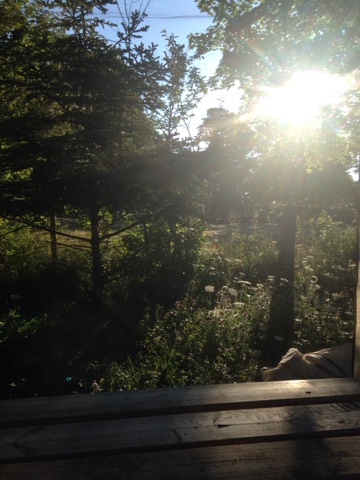 I'm sitting here at the picnic table with a slice of plum bread enjoying what is probably the coolest morning we've had in a month. It's about 12 degrees but warming steadily as the sun rises. It's a welcome break from some very hot and unrelentingly dry weather. The river is the lowest anyone can recall for decades but our well seems to be fine as long as people do not leave the hose running for 12 hours.
We had a late night last night. Jordan didn't finish work until 1am so I'm still a bit short of sleep but there's lots of work to be done so I'm sitting here with my notebook. It's now August which means thinking ahead to the end of summer growing. But it's not too late to plant a garden. We are 65 days from first frost (it's just an average) in Greenwood and that means we have time for cool season veggies again. Peas, cabbage, broccoli, lettuce, radishes, leeks etc.  Some are started indoors and taken out as transplants so they're growing in the house until they're big enough, others will be direct seeded which means preparing the beds once one crop is finished to make room for the next. So even though we are busy harvesting beans, peas and watching the watermelons grow, were thinking ahead to the next crop and next year. We are also evaluating how the nursery did this year. Next year we will do more selection and an automatic watering system.
I'm getting a camera for my early birthday present from one of my sons so I'll take some pics this week. Anything you want to see?
This weekend the Mid Valley Farmers Market is celebrating its one year anniversary. There's a big celebration planned with activities for the kids and great deals at the vendors. If you've wanted to sell at the market but not sure how to give it a try, this week there are no fees for tables so what do you have to lose? Check us out on Facebook.
Okay well I should get back to work. Time to organize the kids and wwoofers work for the morning. I'll talk to you soon. Elizabeth
Posted by Elizabeth Faires at 8:33 AM