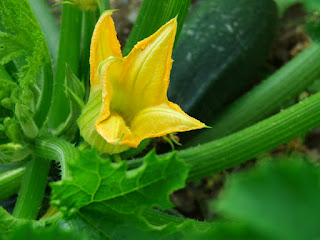 It's that time of year when we're gearing up to make cheese, preserve fruits and veggies, and eat as much fresh produce as we can. Kate has been out picking beans every day this week and looks set to continue for a week or two yet. Our beans at the main garden are just flowering now and will come on as the beans here in our small garden finish. Potatoes are ready for digging as new potatoes, and we're over run with zucchini as usual. Thank goodness we like it so much!

The corn at the house looks to be a total dud but the tomatoes and beans have done well. Conversely at the other garden it's making lots of nice leafy greens so radishes do not make roots, just leaves. Maybe once the weather cools. We're getting in there today with the tiller and a shovel and fork to take out potatoes and then cut out any weeds before we till it again for our cool weather crops and potentially a poly tunnel greenhouse. Depending on the weather we could look at having our first frost in 4 weeks bt it may also be 8 weeks until it really starts to cool down, so even with the decreasing daylight we have time for some fall crops to get in the ground. Beets, turnips, peas and salad crops are going in this weekend in the space taken from the potatoes.

Remember we planted some store bought Jacobs Cattle beans just to see if they would grow? Well grow they did! There are now bean vines running amok among the pumpkins and anywhere else they can. Next year I'm going to have to build a really sturdy fence for them. Here at the house the scarlet runners are making beautiful flowers and little beans are just starting and the surprise squash plants look to be buttercup so we'll have plenty for our storage room. I love squash, it makes the best pumpkin pie and is great simply roasted. And we apparently have pumpkins going crazy with their massive vines trailing all over the place and basketball sized green pumpkins forming among the beautiful flowers and green leaves. One of the plants died because of what looked like a white powdery fungus so I sprayed the plants with copper sulphate solution, the same as has been used by grape growers for hundreds of years, and the other plants seem fine. I suspect it'll be ok for at least a few more weeks now that it's warm and not so humid but once we get into cool and damp fall weather I shall spray again just to be safe. And yes, copper sulphate is considered ok by organic standards.

In the greenhouse the tomatoes are still growing vigorously and setting fruit. The cantaloupe, melons and cucumbers are setting fruit too but the eggplants haven't really done anything as of yet. Same as the ones in the garden at home...I'm obviously missing something they need. Oh well, this year always was an experiment to see what would grow and we've learned lots. Now we need to make notes and plan for next year. One thing that did surprisingly badly was peas. I think the soil at the house isn't good for them and the weather has been too hot, so I'm going to do a fall planting and see if I can get mature peas before the weather gets too frosty. One thing about fall veggies...they are way sweeter than their summer cousins so it makes the risk worthwhile.

Our straw bale garden is doing well now but didn't do well at first because of the heat and because it was SO DRY! It was impossible to keep the bales watered properly. Now that they've decomposed a bit more the tomatoes have re-rooted and gotten a good foothold and are thriving, I just wonder if it's too little too late but they are flowering so we'll see. It's all going to be up to the first frost whether we make sauce or green tomato relish. I've got the other row of bales ready for planting and am going to try lettuces this time.

Our next batch of chicks is set to arrive Sept 11th. We got both meat birds and day old laying hens with the idea that they can be raised outdoors in a poly tunnel greenhouse for a while and we will butcher meat birds before the weather gets too bad and the other layer chicks will be feathered out and have a nice new coop by that time.

My camera is on the blink so I'll get some pics taken this weekend with Steve's phone and add them for you guys to see.

We had lots of fun with Vicki and Corry visiting us for 3 weeks and got to see some beautiful places. We miss them. But now it's back to the daily chores, laundry and weeding. Hope you're all still with us as we move into fall gardening and making building plans.

Posted by Elizabeth Faires at 8:06 AM