Our new ewes are coming on Sept 28th so this weekend we'll have the barn finished and the fence in place. The importance of the barn is really for keeping the hay dry and as a shelter for new lambs once they come. Sheep will happily live outside with a cover or 3 sided shelter in even the nastiest weather, but we like to have a barn available anyways. We're also going to add a coop on one side and probably a lean to shelter to the other side for the sheep to have some shade if they want it.

The sheep we're getting are culls from a larger flock. And since I would usually advise people to make sure they're not getting culls, why are we doing it? Did we feel sorry for the sheep?

In keeping livestock there's a balancing of caring for your animals and being able to butcher them if you're raising them for meat. Good producers treat their animals well and take care of their needs while still being able to maintain perspective and know that they have given them a good life before slaughter. Does that make sense?

Well, our girls are very good quality mature ewes of 3-4 years old that have lambed multiple times each and have twins/triplets. I've seen their lambs from this past spring and they're lovely healthy looking animals. But such frequent lambing, ( the STAR system does 5 lambings in 3 years) nursing and subsequent mastitis (I suspect) has left them with udders that are blind on one side, that is, they only make milk on one side so a lamb can only suckle on the one nipple. That's fine for a single lamb but what 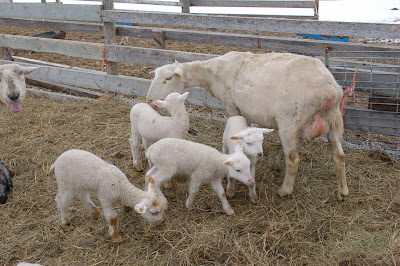 about for twins, triplets or quads? Who feeds the other ones? Well the short answer is that the shepherd is responsible. So as I mentioned in a previous post, we'll be out in the cold and dark bottle feeding lambs. It doesn't sound too bad does it? But feeding colostrum to lambs is a 5 times a day commitment and after that they still need 3-4 feedings every 24 hours. So your day looks like this: feedings at 6am, 11am and the bedding gets cleaned now, 4pm and then before bed at about 9 or 10pm. For newborns there's a middle of the night feeding at 2am. Plus each feeding can take an hour or more and you have to factor in the prep time for mixing milk replacer as well as the cleaning of equipment afterwards. Suddenly it's looking like a full time job! Which is is for the first month until they are eating hay and grain and having less frequent feedings.

So you may be asking yourself why on earth I'd want to do this. Well for several reasons, the main one being economy. We would like a flock of good quality meat sheep with mid grade fleece so that we can have meat lambs and spin the wool. We are getting 4 Rideau Arcott and 1 Charollais. However, the going rate for a good breeding ewe is around $200-$250 and there's the cost of freight and breeding. So a flock of 10 ewes, bred and transported would cost around $3000. I don't have that much money so we're going another route. Our 5 ewes are costing us $750 and are bred to a lovely Suffolk ram, that's basically half price. By the spring we aim to have raised 10 lambs with 5 ewe lambs being kept in the flock and 5 (or more) lambs for market. If we make an average profit of $200 per lamb sold then it will more than balance out the cost of feed for the lambs and any butchering fees, equipment etc. Plus I'll still have those 5 new ewes for a total of 10 breeding ewes. My flock will have taken lots of work but cost me $750. The following year we'll let the younger ewes raise their own babies, do the same thing again with the older ewes and keep 5 ewe lambs back for a total of 15 ewes. At the end of the summer we'll cull the older ewes leaving us with 5 one year old ewes and 5 two year old ewes.

Will it be worth it? We think so or we wouldn't be willing to try. If we get lucky I'm hoping that we can make enough money to buy an older livestock trailer and save the transportation fees of our market lambs and for other farm use. Trailers are SO helpful. I can live without a truck, but the trailer is a necessity!

Other reasons we're getting sheep are that they are good close grazers and that will be very good for our pastures, trimming them up nicely. Sheep also do well in orchards and that's something we're starting to work at rejuvenating this fall. The trees bore apples but are definitely in need of some pruning and there are some 30 foot pine trees growing up in there and shading them out so the pines are coming down. I guess we can always limb them and them use them as posts for a run-in shelter for the sheep. Hmmm, that seems like a good idea.

Once the pasture for the sheep is finished this weekend, I'm going to turn my attention to perimeter fencing. We measured it all out and will need approximately 110 posts and 7 rolls of barbed wire (1320 ft each) to make a 4 strand fence all around our pasture along the neighbours, the river and the road side. We found a local family who make posts and charge $1.75 each so we might use them for a good number of the posts with some larger posts from the feed store on the braced corners. I'll leave that up to Steve. If we can get the posts in the ground before the weather turns nasty that would be good but for right now we're a bit short of money and have other priorities (like bills) to pay first. Fencing can wait for now.

The new chicks are all snuggly warm and in their boxes in the garage but next week we'll be moving them over to the garden to a poly tunnel shelter. We built a frame out of 2x2's and then put PVC pipe over in hoops to support the plastic roof. The frame both holds up the hoops and gives us an anchor for the heat lamps to hang from. I'll take pics once it's all ready to go. The plan is to raise them out beside the greenhouse for the next few weeks while the tomatoes/cucumbers etc finish up and then we'll move them into the greenhouse when the plants are removed. They can scratch up the ground, remove any bugs and fertilize it for us. We'll probably keep the meat birds for 10 weeks which puts us into December and then will dig over and rest the greenhouse for a few weeks before getting ready for a very early spring planting.

This weekend is going to be just crazy busy. But I know that all this work will pay off in the end. Have to go. Hope you have a good weekend. Look for more about the Rideau Arcott breed of sheep tomorrow.

I'll cover bottle raising lambs in a later post, likely in January as we get closer to lambing time.
Posted by Elizabeth Faires at 7:48 AM