And Something Went BUMP In The Night

Sitting here this evening I heard the bugs flitting outside the window against the screen and I thought about the moths which I don't like and how grateful I am for window screens. When all of a sudden something much heavier bounced off the screen with a definite 'twang!' Say it isn't so! The June bugs are back! GROAN

June bugs are not my friend. And I'll let you in on a secret. I have an irrational fear of flying insects. I'm okay with butterflies but moths just do me in. I know I know, they can't hurt me. I KNOW that, inside my head. But when they're being all floppy and dive bombing my face I freak out. I gradually have lessened my fear as I've progressed on this Earth, 40 years of living in moth country. And then along came the ultimate nemesis ... the June Bug or June Beetle as it's also known. 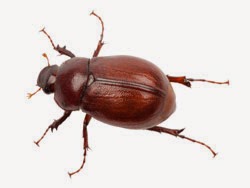 These rather large members of the scarab beetle family can fly but are exceedingly clumsy and are attracted to light so you'll hear them hit the wall, screen and light fixtures on the outside of you house with a wet sounding thwack every evening for several weeks. The worst part of June bugs is that they have lumpy legs that act sort of like velcro and so if they land on your clothing or heaven forbid, in your hair, they're very difficult to get out again. It's not like a quick swipe and they just fly off. Oh no! They stick on so you have to actually touch them and peel them out of your hair like a giant burr. <

There's not a lot you can really do but wait for June bug season to end in a few weeks. In the meantime you can bait them by leaving a light source on outside away from doors and windows, and keep the curtains closed so there's less light to be attracted to. I remember last year being so grossed out because there must have been close to a hundred June bugs all over the screen door one evening that I actually found a can of Raid and sprayed them all. It seemed like a great idea...until I tried to leave the house the following morning and had to crunch and squish my way across all their little beetle bodies.

I can hear the ducks making some of their hunting noises so I'm wondering if despite it being 10:30 at night, if they're out sloshing down some bugs for a night cap. If they are then they're suddenly my new best friends. I really don't like June bugs. I've been out fishing as the sun set and heard them coming across the lake towards me. Honestly the sound is like a drone coming to terrify me so I always pack up my rods and gear and go home.

Probably my nastiest experience with a June bug was in Chris' Grade 11 year at West Kings High School. I was driving the vehicle along Glebe Rd near Greenwood and had the music turned up and the windows open enjoying the evening air. I think I was driving him to one of the last rugby games of the season. When all of a sudden a nice fat juicy beetle hit the vertical window frame beside the windshield and my open window and exploded into a mass of green beetle juice and bright pink guts. This concoction then splattered one whole side of my face and glasses. Being chivalrous as he is, Christopher did hand me a kleenex after he stopped clutching his sides with laughter. How kind of him. So that is my ultimate horror story of June bugs so far. Needless to say, it did nothing to lessen my dread of these cursed beetles. YUCK!!

Posted by Elizabeth Faires at 10:51 PM