Steve gets a Job... I need wheels.

Steve never did hear anything back from the local appliance company he went out on the road with. He said they seemed really nice and were interested but apparently not, as it's been almost 3 weeks now and not a word. Since it takes some time to get everything ready when you start your own business, we decided to look for work to do in the meantime. Plus the budget makes it important to have an income. Steve had got a job in Sackville, about 90 minutes from our house, doing commercial equipment repairs. The job, as advertised pays $12 per hour for 40 hours a week and it's something to keep Steve busy and brings in some money each month which we need. And if it turns out he can condense his work schedule to work 4-10 hour days then it means he can work here doing appliance repair in the valley for a couple of days a week too. He travels within the Halifax/Dartmouth area as well as up here in the Annapolis Valley so we might see him for lunch occasionally which would be nice.

It does of course mean that we are looking for a new vehicle to buy so that I can get around and drive the kids to lessons and activities. A clunker is fine as long as it has a current inspection and is CHEAP!

Steve has been at his new job for a few days now and seems to be liking both the owners and the work. Plus he gets to spend time at Tim Hortons every time their machines need repair so I'm sure he can sneak in the occasional donut (he loves them!) The commute is boring but at least he can listen to his iPod in peace without the kids telling him that he has bad taste in music. And his new uniform is of course navy work pants (which he owns a bunch of) and some company supplied blue shirts. So in case you are wondering..... YES, he does look like the Maytag repair man, only without the hat, bow tie and bored expression! Still, he's comfortable and happy so that's the main thing isn't it. 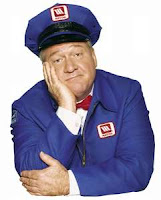 Check out this funny car commercial featuring the Maytag repair men from 10 years ago :)
Posted by Elizabeth Faires at 10:56 AM