Come One Come All, To The Harvest Ball!

Well, they call it a 'Ball' but it's really just a casual family dance with treats. Should be fun though and the girls are really looking forward to getting on their dancing shoes and fancy dresses. I suspect lip gloss will be requested and hair curling too. Yikes! This is always weird for me as I'm not a girly girl. Still, it should be some family fun and maybe I can get Steve to dance with me.

Today I have only a few things planned. Vacuum the upstairs, clean the kitchen, and
re-work the chapter layouts for the book. Without giving too much away...I've covered different livestock, building methods, tools, crops, some skills and ways of developing a personalized plan for each reader. What would you like to read about in a self-sufficiency book? I want to make sure that there's something in there for everyone so any suggestions are greatly appreciated. And don't assume I've covered it already because one thing I've found is that when you're good at something or very familiar with it, you take it for granted that other people know the basics...and that's often not true. I'm also looking for a proof reader or two that I can send chapters to and who will give me suggestions and critique them. It won't be for a month or two yet but if you think you can help out then give me a shout. 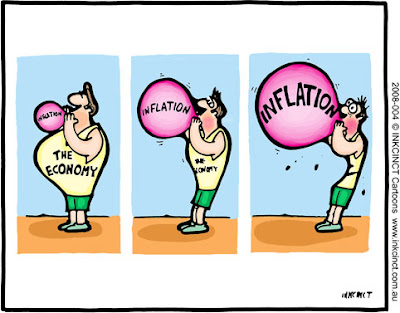 I've been reading the news...depressing as usual to see how uncaring and unconnected some individuals are. But of course the latest economic and inflation figures are out so I had to read. Well my friends...how much do you think food prices rose over the past year? And what about gasoline? Well I won't keep you in suspense but I will let you know that these figures are released by the government and should be taken with a grain of salt until you have done your own research because let's face it...stats can be manipulated for different purposes.

Food, which means everything edible basically from bread to veggies to cola, was up 4.3% in Canada which experienced one of the lowest inflation rates in the world, so I'll just relate the rest of this information to Canada. Now that might not seem to bad right? 4.3%. But that's all foods including healthy ones and junk. Do you eat meat? It rose by 6.1% due to grain prices and it's set to rise sharply again in the coming months due to some bad harvests in grain producing regions. Bread and other bakery products were up 7.2%. But worst of all, fresh fruits and veggies were up 13% over this time last year. So if you follow a basic and healthy diet then you bore the brunt of the food inflation. This doesn't mean a lot to people with money. But for those on a pension or other benefit it can be critical. I assure you that government payments certainly did not go up at the rate of inflation. Although they are supposed to be adjusted according to the cost of living index, it's not as smooth and easy as it sounds.Firstly inflation happens slowly over the months and unevenly. Different regions experience different growth trends than others. It's sort of like the frog in the pot. Turn up the heat gradually and he won't notice until it's too late. If we were hit with these percentages all at once then there's be a revolt. Like a frog put into a hot pot just jumps out.

It's the same with moral decay in society. It happens slowly and gradually so we just shake our head sadly and hope it never happens to us but before long the once frowned upon behaviour is commonplace and acceptable. It's sad but true. But this is where goal setting can help. We can use the gradual change to do good things too. Stop smoking. Lose weight. Learn a new skill. Grow a garden. Save to buy a home. I'm sure you can think of lots of other goals. Each one has a series of steps that are necessary to achieve the ultimate goal. Slow and steady progress leads to fulfilled goals. When it's hard to stay motivated we just need to look back at where we came from and see the differences so far. Then get back to work. Recording your progress can be a good motivator, read it and see if you notice a difference. Like reading your teenage diary. You thought you were so cool and mature then but now you read it and think you were a total twinkie (all air and not much substance. Also a term I use to describe some giggling and shallow teenage girls). Maybe we'll think that about our current selves when we're old and grey, I don't know. But it's nice to be able to read and see the difference. Continual progress is a good thing.
Posted by Elizabeth Faires at 9:27 AM