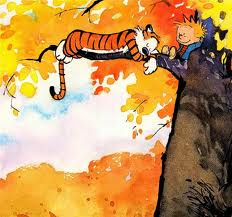 "The days are getting colder. Yes. Bugs are dying by the truckload! Ha ha ha! Good riddance to 'em all! … I like fall" - Calvin and Hobbes
Wow yesterday fairly flew by! I got my chores done (mostly) did my visiting teaching again and had the elders over for dinner. Steve was an hour late so as soon as he darkened the door we took off for riding lessons but didn't get there and ready until nearly 8. Needless to say...after lessons and a visit we weren't home until 11pm. That's WAY too late for us. I can't wait to have the other van up and running so we can go to lessons after school again. Fingers crossed that will be next week.

It's definitely cooled down to seasonal temperatures here in the valley. Still warm sunny afternoons in the mid teens but the nights are going down to 3 or 4 degrees celcius. That's still not too bad I guess. I've just lit a small fire in the furnace to warm the house by a few degrees. Currently it varies from 66-68 depending on the room which is ok but since I'm going to be sitting to write for long periods today I'm going to be feeling the chill and I thought that spending $1-2 on wood for the fire seemed like a worthwhile investment. It's amazing the difference a few degrees makes to your comfort, especially in a damp climate. I imagine we'll burn more fuel this winter than next just because we're still getting acclimatized. I imagine it's much worse for people from the prairies where it's a dry cold because the damp seems to go right through to your bones.

Apple are sending me a new power supply for my MacBook that should arrive this week. I really miss that little white lap warmer and it'll be good to have easy access to the internet and my book again. It's amazing how you get used to one laptop over other computers, familiarity is a very pleasant thing.

So to explain the title for todays post...I mentioned car insurance the other day and now we have a new consideration before buying from any company...how good their claims department are. Why? A very good friend of ours was in a nasty collision on the highway when a car coming in the other direction turned left in front of him causing him to total his van into the passenger side of her vehicle. There was simply not time to react. Both of them are relatively unhurt luckily but it's still a scary thing and the police had to close the one lane on the road and divert traffic for a while. Our friend who was the victim in this is a really nice and fair guy. He said it was just an accident on her part and said he wouldn't press charges or sue or anything. All he really wants is his vehicle replaced as the accident was clearly her fault. No pain and suffering or loss of income, no medical bills...he isn't charging her a nickle. Sounds good for the lady who hit him don't you think? Don't you think she'd be super grateful? Well apparently not. The way it works is that she has to file a claim with her insurance (which she hasn't) before our friend can make claim or get any benefits. So he's been without a vehicle since the accident on Friday and can't get a rental which is covered by his insurance until she makes a claim. Now she's not returning his calls. Nice. He's being kind and fair about it and she's screwing him over...at least that's the way it looks right now but I hope I'm wrong. It's really no wonder that people don't trust each other any more is it? I hope that she gets it all sorted out and treats him as well as he's treated her. 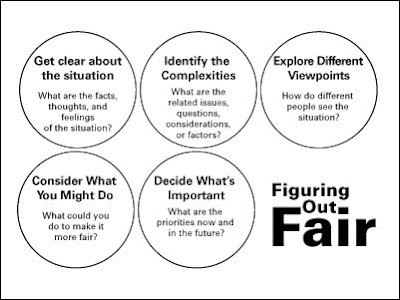 When we are fair and kind to other people it makes the world a better place. Selfishness and greed affect those around us and drag society down. Have you ever noticed that some of the poorest people in the world are the ones who are the most generous? They'll share a meal with you, offer a small gift, take time to help you...even if they have basically nothing. They understand that there are some things in life more important than financial gain over and above what they need to meet their daily needs. Charity, compassion, kindness, respect, loving relationships with our family and friends; All these things make us better and happier people in the long run. These are things that money cannot buy. I always say that I'd rather be happy and poor than rich and miserable. And while enough money to pay the bills and have an easier life would be nice...I'm not willing to trade my soul for it. That doesn't mean we don't work hard and spend thriftily but it it means we don't get so caught up in money that we fail to see the beauty around us in the faces of our children and grandchildren.

And now for a word of wisdom from Calving and Hobbes:

Calvin: I've decided I want to be a millionaire when I grow up.
Dad: Well you'll have to work pretty hard to get a million dollars.
Calvin: No, I won't. You will.
Dad: Me?
Calvin: I just want to inherit it.
Posted by Elizabeth Faires at 10:16 AM