Kate is loving her babysitting course. Of course, given her handicap it's more of a rite of passage than an expectation to actually babysit alone, but I think that the skills will be a boost for her confidence and she'll be personally better prepared with things like some basic first aid skills. She can help me babysit too which I know she'd love. And you never know...shes already surpassed all expectations so why not expect more from her? I don't want to limit her chances at success.

On a bad note though, she didn't call but I know she forgot her lunch and snacks because I just found them under the front hall table. Maybe she had enough money left on her cafeteria card. 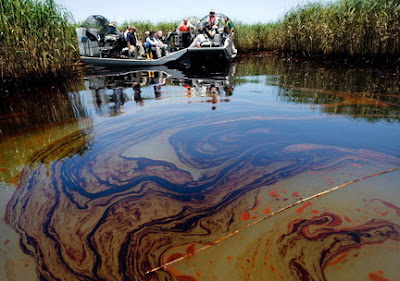 I was doing some checking around today about the oil spill in the Gulf of Mexico. It's been over a year since that gusher was capped and clean up efforts got under way full steam. We don't hear anything about it in the news anymore, at least I haven't heard or seen anything. So I decided to go look and see what came up. Basically I found that there are some long term affects including huge die offs of mangroves, shellfish including oysters and the fact that oil is still in the water in larger than naturally occurring quantities on the sea floor. All of these in their turn affect other things too. Without the mangrove swamps to protect the coastline, soil erosion occurs, animals, fish and birds lose their habitat, the coast is subject to damage from wind and wave action. In their turn these all affect other things things too. We often just see things in terms of how they affect humans so let me tell you a human story of some fishermen along the gulf coast states. There are people who are still struggling to make ends meet since the collapse of the fishing industry. Fish populations are expected to recover for the most part within 10-15 years if there's a ban or partial ban on fishing for the next while to give the remaining stocks time to mature and breed. But in the meantime how are fisherman supposed to feed their families, maintain their craft and pay their bills? Do we just expect them to wait around or will they leave the sea out of necessity and we'll end up losing a valuable skill and knowledge base? It's the unknown long-term consequences that worry me more than the immediate environmental ones. Those are the ones everyone sees and takes care of. But what about fisherman with claims against BP who've still not been paid? And how do you make a claim for unknown future lost earnings?

Most of the smaller claims seem to have been paid out though I can't confirm exact numbers with BP due to their citing Privacy rules, and I respect that. But it looks like approx 90% of all approved claims have received at least interim payments and better than half of the claims have been paid in full. But there's still 10% who've received nothing yet and most of the claims that are not settled are big...half a million dollars or more each.

Some people are saying that the inflated claims of businesses are holding up the system, and that may be the case occasionally. But the BP guys have to approve an awful lot of paperwork before dishing out any money and it's not a job I'd want, trying to find the honest guys out of a bunch of crooks just looking to make a quick buck.

That being said, it's a long process. Other communities are still fighting and recovering from their own spills. This isn't the first big one, that was the Torrey Canyon which dumped a half million barrels of oil off the southern coast of England and affected the coastlines of England, France and Spain in 1967. The Exxon Valdez spill is famous, perhaps because it affected the pristine wilderness of Alaska but it's dwarfed by so many others. The IXTOC 1 well in the Gulf Of Mexico spilled 140 million gallons. In 1969 off the coast of California 4 million TONS of oil were reported released into the water. On the same scale as this, during the Persian Gulf War in 1991 the Iraqi army sank several supertankers deliberately into the Gulf and also dumped hundreds of thousands of gallons of oil off the Kuwait docks directly into the water. It devastated the eco-system and as it was done deliberately I think it's the most heinous of all spills. It didn't occur through negligence or accident, it was done intentionally and for malicious reasons.

There are of course other spills and losses of life but it is possible to recover. Check out this report from the BBC in Galicia, SpainSo life goes on and now we wait to see how nature recovers from this latest blow. But one thing is for certain, she'll recover in her own good way and time, regardless of us humans. It might not be the same as before, but she'll do the best she can in the circumstances. And we're lucky to have a planet like this in the first place, we should appreciate her more. Earth hour isn't until the end of March, but maybe we can all turn off a light or two, pay better attention to our water use and recycling, and do a little extra in honour of the planet that sustains our very lives.


Posted by Elizabeth Faires at 1:58 PM