Goats -Love or hate them, they're good animals for a homestead. 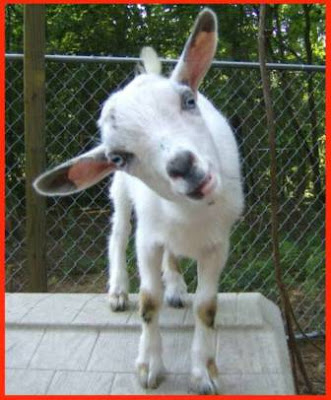 I Love Goats. But not everyone does. There's even a website called The Childhood Goat Trauma Foundation. Go have a chuckle if you want to look them up. Unless of course you hate goats like one of my mothers does. I don't get it, but probably because I like goats. They're smart, playful, can clear brush and brambles and give lovely milk (unless they're kept near a billy). What's not to love? My preferred breed would be the Nigerian Dwarf and mine were blue eyed. Small stature with good milk output and ours gave triplets every time. We've had lots and loved them dearly. Infact we nearly brought Soo our last goat across the country in her kennel but though it would be cruel to have her in there 20 hours a day for 3 weeks so she went to a nice home on Vancouver Island instead. Sigh. I do miss her though.

Goats are browsers who eat a wide variety of foods. Contrary to popular belief they don't eat tin cans, laundry, shoes, small children or metal fencing. However, they do like to carry stuff around in their mouth and will give anything new a nibble including your sheets on the line, but just a nibble. They are great for land clearing before you get the pigs in though. They'll eat small saplings, blackberry bushes, broadleaved plants, cedar and fir, veggies, wild roses and are game to try anything. This varied diet is probably responsible for their overall good health. We did however have one goat named Billy (we didn't name him) and he got out one day and nibbled out neighbours brand new cedar siding. They were nice about it thank goodness. So since that point we always kept several goats so that they don't get lonely and too creative. Lots of goats act like puppies and bond strongly with humans and while that can be good I think there has to be a line between who lives inside the people house and who lives in the barn. 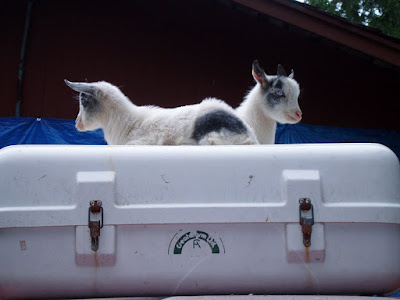 Here are a couple of kids, about 4 months old sitting on the car top carrier on the roof of our van. Their favourite place to chill out.
Goats are pretty low maintenance apart from fencing. If you have an area you want to keep them in then good fencing is a must. They're agile climbers and smart to boot. They've got 24 hours a day to figure out how to get through the fence to your prized flower garden. So make sure you inspect the fence regularly and look for signs of tunneling, hair on the fence where they've crawled through as well as objects pushed close to the fence that they can jump onto for an easy exit. A good fence will also alleviate worries about dogs causing harm to them too. Although our goats weren't bothered and would defend themselves with their horns, not all goats have horns and you don't want to upset a pregnant or lactating momma either.

Housing should be clean, well ventilated and dry with a floor above ground if your climate is damp but goats are pretty hardy and like the freedom of access to the outdoors most of the time. Figure out what works best in your area and build accordingly. If you're using concrete though remember that you should have several inches of straw down for comfort. Concrete, while easy to clean and sanitize, is cold and unforgiving to lie on. 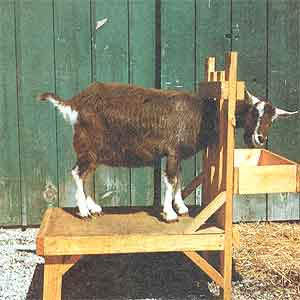 Milking goats is easy. You'll need some type of restraint (either a rope or stanchion) a milking stand really helps too, a bucket, some cloths and water for cleansing the udder, some food for her to eat and a quiet place. Goats can be particular about who milks them and where. They bond with one person so don't be offended of your little 'Brownie' decides she likes your husband more than you. It happens. Just pick a quiet place, set up your stand and milk away. Goats differ in their milk production depending on the breed, where she is in her lactation and somewhat between individual does too. But if she's not near a billy (who will make the milk taste awfully musky) and in good health she can produce between 2 and 4 litres per day. Certainly a more usable amount than a heavily producing cow and some breeds are higher in fat and protein than cows milk too. There are dairy and meat breeds so do a little research if you're interested and see what your local farmers have. If they're all using one type of goat maybe there's a reason. So check it out. Here's a good article about milk goats. It points out how important goat milk is to the sustaining of humans the world over, especially in marginal and poor agricultural areas as well as the current Swiss breeds used as dairy herds. For another good article check out the M.E.News from June 2006 or wikipedia. On the Wiki article there's a little white goat getting through a fence...that's what a Nigerian Dwarf looks like :) and they come in a range of colours. There is a TON of good info online. Read and research before committing to a goat or 2 (or more). But as for me...I'm sticking with my Nigerian Dwarf.

This is Simon. One of the WWOOF'ers who stayed with us in 2009. He lives in Germany and came to stay part of the summer, working on the farm. He loved our 3 year old doe 'Blackberry'. They have matching beards. Although she has brown eyes our buck is blue-eyed and so were all his offspring. It's mid summer so dry and dusty on Vancouver Island. That's the pump house and a chicken house in the background.

Posted by Elizabeth Faires at 10:00 AM