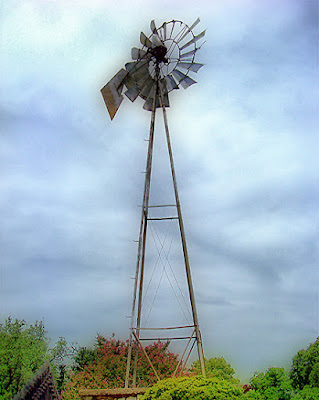 Both wind and solar have their advantages and downfalls, wouldn't you say? For sustainability purposes you really need a combination of active and passive solar (charging batteries and heating a solarium for examples), water and/or wind. Wind power doesn't just turn electricity generating turbines though. Think back to the 'good old days' and those farms of the American or Australian men and women of the 1920's. The 2 most prominent features were likely to have been grain silos and a windmill that pumped water from deep underground using a simple up/down piston action.

These windmills were vital to maintaining a water supply and were completely mechanical so farmers could easily repair them and change the gear oil when needed. That's important to a farmer because they don't always live near towns and cities so being able to repair your own machinery promptly is vital. One of the reasons windmills also pump water into storage tanks is so that should something happen or if the wind isn't blowing much for a few days, there's still a supply of water to be had. Don't forget that it wasn't just water for the family, but for livestock and irrigation too, all coming from the same well and the same storage tank. In dry places like Australia water is even more important. In some places water is stored during the rainy season for the dry season so as to not deplete already strained wells. Water really is the life blood of any farm. 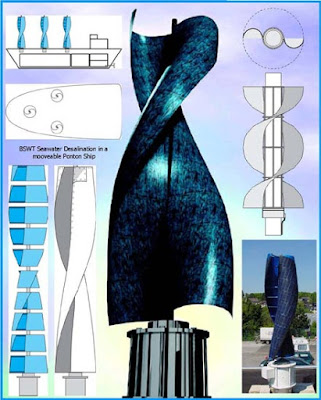 Today windmills come in all sorts of weird and wonderful shapes with a variety of intended uses. But they can be so complex that repairs are beyond the average person. The one pictured here is covered in photovoltaic cells and produces electricity in 2 ways. However water wheels and windmills are quite basic in their operations and it wouldn't be hard to find someone to repair them if needed. The concept of using the turning action and gearing to power grind stones, saw blades, pumps and hammers is not new, they've been used for hundreds of years and have stood the test of time. A community was considered settled and well on it's way to success as soon as it had a grist mill in the 1800's. Why? Because all the farmers came to have grains ground and the mill became the centre of commerce. When you eat bread everyday there's simply no way you want to spend hours grinding the flour yourself, you wouldn't have had time what with raising children, cooking, laundry, cleaning, tending to the livestock, milking etc. Life was busy. You had to save time where you could. Boy, we're so lucky to have things like washing machines and supermarkets and hot running water on demand! I still think back to our 4 months living in the motorhome and the lovely outdoor showers in the wind...it does make me appreciate my modern conveniences for sure! Especially my non-folding bed and hot running water in a bathroom that's neither outdoors nor 2x3 feet.

Have you ever thought about getting a windmill or looked at the price of windmill kits, the ones that you buy and assemble yourself at home? They've come down in price but are still pretty expensive. Same with solar cells. You need to be really committed or be building it into your new home from the start to reap the benefits in the short term. And you need to live in an area that has fairly windy conditions for a good portion of the year. Southern Alberta is consistently windy, the trees grow at an angle caused by the prevailing wind, and that's why there are so many wind farms in the area. But for home use we are looking at water turbine generation (more water flow in winter when more power is needed), wind power for a water pump with a simple storage tank that can gravity feed the house, and a combination of passive solar and solar cells. We'll likely connect to the grid anyways but these other methods would give us enough power for most of our needs and in an emergency would still give us running water and some heat for our home. It's the combination of things working together that we like instead of being entirely dependent on one source. There are plenty of people around here who have electric heat with no back-up, and that just doesn't seem wise to me. At least if the power goes out and we don't have the fan for the furnace, there's a certain amount of convection and radiation that happens. It's always good to plan ahead for these things rather than being caught out at the last minute.

If you want to know more about how a windmill works for pumping water just read this article. The cute little animation really shows in basic terms how a pumping windmill works. It totally makes me want to go build one now, lol. I wonder what Steve would think. Actually my mentioning that I was interested in generating my own hydro-electric power was one of the first things he liked about me, so he'd probably let me do it. The wish list for our new home is getting bigger and bigger, with things like windmills and passive solar hot water systems. Once reality kicks in and we have a concrete budget and plan then the fun begins! It's going to be a lot of hard work building our own place, but satisfying too.

Hope you all have a good day. My kids have a half day at school and will be home at noon, and I have some people to go visit this morning so I really should scoot. This afternoon I hope to get more slippers cut out and some sewing done. We have enough pairs already cut to be getting on with. And it will be nice to see things actually appearing in the 'completed' box rather than piling higher and higher in the waiting box. It takes only about an hour for the girls to do the cutting but rather longer to sew. We've to to get cracking though because we've got to get things ready to mail. Well, time to go! TTYL
Posted by Elizabeth Faires at 8:29 AM