I'm trying to give up Pepsi

I'd give up Cola but I'm No Quitter! So instead I'm trying to cut down. I made the move from always diet coke or pepsi to regular and it's shockingly sweet. But it's helped me get down again from litres per day (maybe 2) to on average maybe 2 litres per week. Some days I have a lot and other days I have none. If I'm on the go and need a mental pick me up I'll have some or if I'm getting a migraine and not near my meds. But I'm really trying to cut down for both health reasons and because it gives me heartburn at about 10pm, right when I'm trying to wind down and get some sleep. So far so good. I'm not intending to give it up completely but to imbibe in moderation. I'm not substituting another soda for cola because it's not the caffeine I'm avoiding, it's all pop. All of them have sugar and other ingredients like phosphoric acid that aren't good for you. Since I'd rather drink fruit juice anyways it's not a major stretch except juice costs more and doesn't go very well with a big mac and fries :) 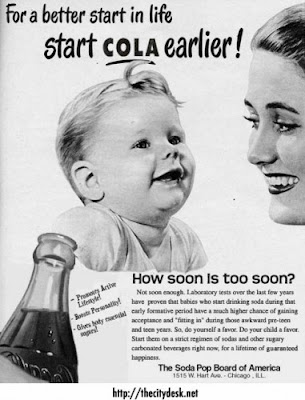 Here's a shocking (by today's standards) print ad for Coca Cola. So much for truth in advertising. I wonder what our dentist friend would have to say about this.

So much sugar has got to be terrible for a child's first teeth. And I've seen kids with terrible teeth just from taking a bottle with milk to bed! I can't imagine what cola would do.

I vividly remember the first time our son Chris ate sugar. It was ice cream, and my mum gave it to him. He was 7 months old and I was horrified. That was the end, I thought, of my sugar free baby. Which may seem odd to those of you who know me wel as I love sweet things. But the kids had limited sugar when they were little. Chris and Jordan first discovered that people ate sugar on cornflakes then they were at a sleepover when they were 6 and 8 years old. Now they are teenagers and for a large part they plan their own snacks but still eat whatever I'm making for dinner unless it's liver like the other night in which case Jordan opted for beans on toast. For the record, the rest of us thought it was very good served with beef gravy and lots of fluffy mashed potatoes. Mmmm. 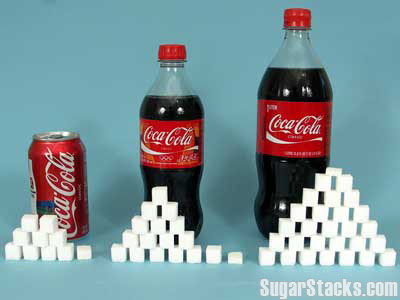 Most of us know that a can of 355ml contains 10 tsp. of sugar, right? Only a serving of cola is not normally 355ml. It's normally double that or more.

The recommended daily intake of sugar is 10 tsp. for an average person so one can of pop is it. No pudding or cake, no sweet sauces, no fruit. And that hardly leads to a healthy diet does it? That's why people drink diet pop, so they can have dessert! But it's also loaded with chemicals and artificial sweeteners, none of which are foods found in nature.


But pop has been around for a long time right? And now that there's no cocaine in cola it's not so bad for you right? WRONG!! You don't need the cocaine to get a high, that's what the sugar is for. Check out the infographic below and see the short term affects from only one can of coke. I'll print some text below for yo to follow along too. 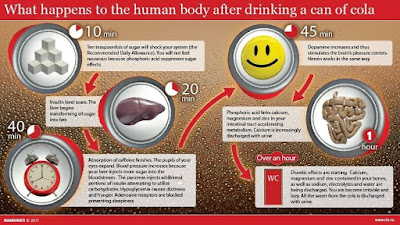 So that's why I'm cutting down on the soda. Plain and simple. I don't want the caffeine withdrawl headache for 10 days so I'm cutting back slowly and that's how people wean themselves off tea and coffee too. I thought you might find it interesting if you've been thinking about eliminating pop yourself. I know that a lot of you don't drink soda, this is for those of us that do. It's just one of the ongoing things I'm trying to do to be more healthy. And self sufficient people can't manufacture coke...ginger ale and root beer yes, but not cola.

And for the record...Pepsi is better than Coke! 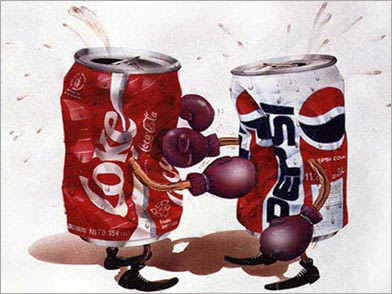 Posted by Elizabeth Faires at 12:26 PM