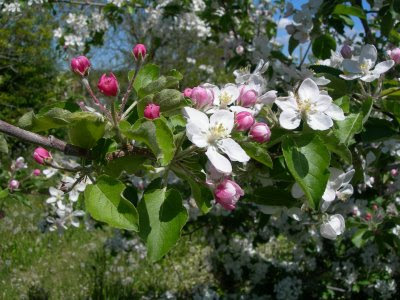 While listening to the CBC on my radio the other afternoon I heard a quote that I loved and it went something like this 'eat an apple on going to bed and you'll stop the Dr. From earning his bread'. Purportedly this is the Welsh precursor to the phrase “an apple a day keeps the Dr. away” that we're all familiar with. During prohibition in the 1930's the apple and cider growers wanted to keep their share of the marketplace and so coined the new slogan as part of an advertising campaign. Since they couldn't sell you cider they encouraged the eating of apples....smart.

The Annapolis Valley is Canada's 3rd most important apple producing region. I was really surprised to learn that because I figured that Ontario and BC with their huge swaths of land devoted to orchards would take all the top 10 spots, but there you have it, we'll be growing apples! We always planned to do this anyways so it's not a huge deal except we plan to grow some English and Heritage varieties for their flavour and not for their ability to withstand thousands of miles of travel. With the exception of one variety, we love Gala! The Annapolis Valley has a big apple blossom festival in the spring which is a lovely way to celebrate the end of winter don't you think? We'll definitely plan to attend and let you know how it is next year.

Here in BC there is a terrific Apple Festival on Salt Spring Island in the fall that we've been to and there are literally hundreds of cultivars of apples, pears, plums and other tree fruits. One particular orchard is all organic and they're called Appleluscious. They use seaweed and compost to maintain fertility for the trees in their orchard. It's not a manicured garden by any stretch of the imagination but the trees are healthy and happy. He actually raises trees for retail sale too so we may order some of his pink apples for our new place. There's a very interesting variety that has a lime green skin on the apple but it's hot pink when you cut it open. Imagine making a fruit salad with that! You'd never buy golden delicious again. 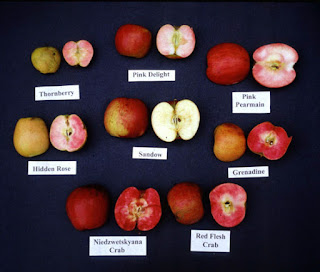 Apples are like most fruit and veggie varieties over the past 200 years, we've gone from hundreds and hundreds of individual variations to a few dozen. There's a group in England called Common Ground and they have a book called Common Ground's Apple Source Book which contains a list of the 2,300 apple varieties grown in the British isles. How many can you buy in the store? How many varieties are available to buy as trees at the nursery? Gone are the local seed varieties and they're largely replaced with the commercially available ones that supposedly do better overall (except for community based seed exchanges who deserve our support for their good work). But I think that by taking away the varieties bred and acclimatized to specific regions not only have we taken away the genetic diversity necessary for survival but we've taken away the vigor and health of the plant world a little. In England valleys and towns were often famous for their veggies and fruits. The British Horticultural Society's annual show was the highlight of the year for home gardeners and head gardeners from large estates to show off their creations and to educate the public about the possibilities available to them. During the Victorian era there was such a remarkable burst of scientific thinking that it trickled into the very fabric of the nation and into it's gardens leading to new discoveries of plants, plant breeding, understanding of chemicals and fertilizers, invention of machines and equipment both for farming (such as steam powered threshers) and for home and estate use (such as hot houses that produced fresh fruit and even pineapples year round). I wasn't kidding about that last one...yes, they raised pineapples in England and even had fresh strawberries, lettuce and peas at Christmas in the large houses. That's better than we have today because our fruit is picked not fully ripe so even if you get your berries in the supermarket in December they just don't taste the same as home grown summer ones do they?

While many of the magnificent walled gardens at estates in England have fallen into ruin or been ploughed under, there are still some lovingly maintained and restored including the ones listed here. It's truly amazing the amount of man hours and innovation that kept these gardens running in their heyday and we can learn so much from the gardeners who literally spent years honing their craft, and producing food really is a craft. Boys would go into the garden as an apprentice washing pots and pulling weeds and gradually through hard work and training would work their way up the hierarchy until maybe one day they would be recognized as a head gardener. A lifetime of work, all the while learning and trying new things while keeping alive traditions handed from one gardener to another. It's very interesting to read all about this and I'd recommend a book called "The Victorian Kitchen Garden" based on a BBC series in the 1990's I think. It's a lovely little book. 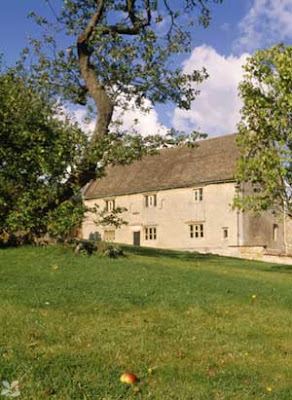 Newton's famous apple tree is alive and well in England. Despite falling over in 1820, this 350+ year old tree is a lovely specimen of Flower of Kent. Where the trunk touched the ground it rooted and has flourished since. SO gravity is not such a bad thing after all.


We will have a full listing of the varieties grown on the farm once we're established and plan on keeping as much of our own seed as possible both to plant and to share. Maybe someday they'll name a carrot after me :)

Remind me in the fall and I'll write an article about winter gardening. It's going to be a lot different in Nova Scotia to grow veggies for at least part of the winter. And the key is actually planning now. Yes you heard me correctly, because many plants in a winter garden are started now then transplanted in the summer and harvested over the course of the winter.

So tell me... what are your favourite apple varieties? Please feel free to comment and let us all know.
Posted by Elizabeth Faires at 4:00 PM