Here's an article I wrote several years ago (possibly 8) while I was living in Calgary, Alberta, Canada. I was thinking of revising the figures because the costs reflect the very low electricity and water rates found in Canada and the cheaper cost of disposable diapers in 2002.

Things have certainly changes since then. Meghan (our youngest) is almost 8 years old now, I'm not taking any new Doula clients until I settle down in Nova Scotia, even my name has changed from Wall to Faires. But one thing has NOT changed.
Cloth Vs. Disposables, The Debate continues… 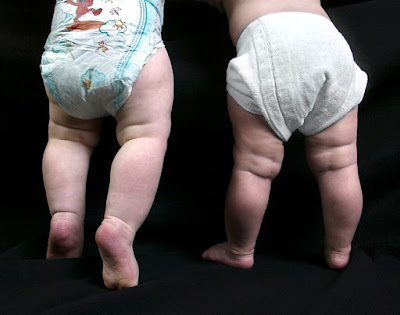 Mothers have used many different methods to diaper their babies. In North America, First Nations mothers used milkweed and other plants to pack around their babies before strapping them into a papoose board. Inuit mothers collected soft moss during the short summer months to line the skins used to carry their babies. In Europe during the 16th century diapers (nappies) were squares of cloth that were folded and then tied around the waist with string.. Aristocratic children and royalty were treated to a clean diaper once a day whereas everyone else could expect to be changed once every 3-4 days! Yuck! Pioneer women made all their own diapers. Due to the often harsh living conditions they were seldom able to wash them and wet diapers were typically just left beside the fire to dry and then reused.

World War II saw the rise of the Diaper Service as women were forced into the work place and no longer had time for the arduous task of washing dozens of diapers. In the 1960’s plastic covered paper diapers exploded onto the scene, often literally. One wetting and they typically disintegrated. Over the past 40 years there have been enormous improvements made to disposable diapers. Different materials, elastic legs and waists, re-usable tabs and better absorbency have combined to make them the number one choice of many parents today. There are even environmentally friendly bio-degradable one use diapers now on the market.

During recent years in Canada we have seen a resurgence in the use of cloth diapers. Many hospitals are starting out their newborns in cotton diapers because of their softness and the ability of diaper services to surpass the hospital standard of cleanliness. Cloth diapers now come in many shapes and sizes from the flat square you fold yourself to contoured diapers with snap or Velcro fasteners. Some diapers are even all-in-one meaning no covers are necessary. These are in effect almost as convenient as disposables and easy to use, even for dad. In Calgary at the present time there are 3 main options: cloth washed at home, the diaper service and disposables.

These figures are based upon using Gabby’s (Calgary) all-in-one diapers sold at retail.

Laundering is based on energy consumption, water, laundry products, depreciation on the washer and dryer, diaper pails etc. and is averaged per load at $.95 Cdn.

Based on purchasing Mega size bags at $18 per bag and an average of 8 changes/day. Does not include transportation to store or costs of garbage disposal.

Based on figures from Rock-A-Dry Baby (Calgary) using contoured snap closing diapers. Diaper cover purchase and washing is the responsibility of the family.

All diapering choices affect our environment. As stated before, using cloth will result in approx. 228 loads of laundry per child. That’s 228 loads of gray water to be processed at Municipal facilities or through your septic field. The water is relatively benign and the human waste is properly treated. Because cloth diapers are 100% reusable (either for other children or as rags) they qualify for the EcoLogo.

The best choice environmentally is the diaper service as they are able to process large numbers of diapers at once thereby limiting the use of detergents and water.

Disposables use more water in their manufacture than cloth do in laundering. Also, the effluent from the various manufacturing processes can release dioxins, furans, and other chemical by-products into the air and ground water. As composting facilities for disposable diapers do not exist in North America, they make the largest single contribution to our landfills after paper and food containers. In a municipal landfill such as ours, just the right conditions exist to mummify a diaper and thereby extending its life to an estimated 500 years. What a legacy for our children! Another consideration is the spread of disease from improperly disposed of human waste.

While I believe these figures clearly state the benefits of cloth diapers, who’s to say you would be wrong to use disposables? The choice of diapers is just one of many that we make about how to raise our children. Breastfeeding, schooling, swimming lessons, music classes, sports… the list goes on and on. The time we spend loving and teaching our children is by far the best thing we can do for them and for our society as a whole.

The views found in this article belong solely to the author and are not endorsed by the DSAA.
Posted by Elizabeth Faires at 4:39 AM