Don't shower outdoors in the wind!!!

Good morning! Sorry there wasn't a post yesterday. We were very busy all day getting things ready for the boys for camp next week. About half way done I think, have the groceries and tents sorted, now need to figure out the shoe situation. Steve also ran the plumbing for our friends suite so that took until 9:15pm then an hour 15 minutes home again meant we pretty well collapsed into bed. I had a headache so I was just intent on sleeping.

It was a bit cooler overnight so one light blanket is not really cutting it. I may consider adding another one for tonight. Brrr! It's warming up nicely now and is 13.5 degrees. Still cooler and damper than any July I've ever had I think. Last year was hot and dry.

Plans for today include waterproofing the flies on the tents, Steve is still finishing up with the motorhome and trailer lights to make sure they are all working. He wants to get the thing weighed so he knows if it's worth taking across the country. He's going to calculate the actual trailer weight compared to the Gross Vehicle Weight to see how much it can actually carry for a payload. He's going to drive the moho and pull the trailer to the weigh scale near Parksville but first he will have to unhook all the internet, power, propane and telephone connections. Sounds like an adventure doesn't it? I am going to take more pics of stuff in the storage locker and get some ads online. Hopefully we can sell a lot of the stuff. Since the deadline is rapidly approaching for our move I'm going to get the girls to hustle and sort out their clothes and toys so they have a bag for on the road with clothes and toys etc. And the rest has to be packed or donated. 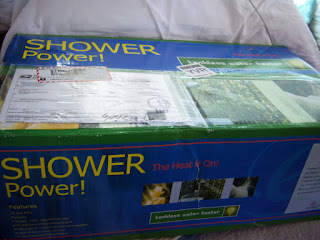 We were SO excited to get out on demand hot water heater. Hooray! We just hooked up the gas and water lines and hung the tank on the office trailer wall. Then using the washing line that's already hanging in that area we made a little enclosure that's about 3x4 feet and surrounded by a thick white tarp on 2 sides and a shower curtain on the other with a 12 inch gap along the bottom. There is a chunk of plywood for the 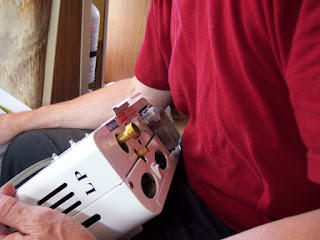 floor and the shower water just runs off into the sand. Simple yet effective. We have the flow rate and temperature already set so once the propane tank and hose are turned on it's already to go. You just go into the shower, turn on the water on the actual shower head and the boiler fires up. Hot water within seconds! If you want it a little warmer it's easy to just adjust the shower on/off switch a little more towards the closed side and as the flow decreases the temperature of the water increases.

So back to the story.... Once Steve was done it was my turn so I grabbed all my stuff and headed out. Now I wouldn't say I'm a prude as such, but taking off all your clothes outdoors does seem a little disconcerting I must say :) It was 10:30pm so quite dark and getting a little breezy too. Everything was going fantastically until one larger gust of wind blew the tarp side of the shower against my back. WOW MAMA! COLD!!!!! Having a tarp contact your back is quite a shock if you are not expecting it let me tell you! Another thing to get used to is the lack of anything you can lean against to get dried and dressed. But apart from that we are totally thrilled to be able to luxuriate in flowing water again, what a treat!

So here's what I've learned from our new shower:
-Hot running water is a blessing!
-Don't shower when it's windy or expect surprises if you do.
-It is somehow possible for the wind to blow in such a way as to make all 3 walls move inwards at the same time.
-A gentle breeze counteracts the warmth from the water as soon as it stops hitting you so any part not under the stream of water is quickly chilled.
-Buy a big towel and cover as much as possible for your run from shower to motorhome to avoid getting chilled right through.
-The dog thinks what you're doing is really humorous...the cats just think you're nuts.
Posted by Elizabeth Faires at 10:58 AM