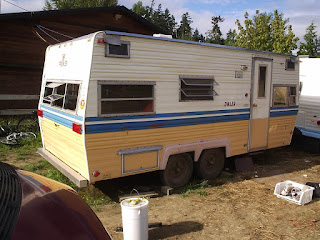 Yes we're still at it, selling all our worldly goods. Good Morning Madam! Can I interest you in this lovely ...(insert item here)... We're selling food storage, appliances (wanna buy a big chest freezer or a front loader washing machine)? Also selling our Ford Aerostar Minivan if you're interested and the Prowler trailer.

Things are getting closer to the deadline for moving so the stress is building but we're all still talking to each other so that's good. Tomorrow the guys are building the roof top on the trailer, it just didn't happen today with all that's going on and Steve's over at Nic and John's finishing up their bus right now. If you haven't checked it out their website is nicolefaires.com and you can see video of their bus and Stephen working on it. The things we do for our kids! lol We're really going to miss them once we move so it's nice for Steve to have extra time with them, that's for sure.

Today the dog went to the vet, it turns out she's strained both shoulders during her latest 'break the metal cable' escape attempt. She was going after a raccoon. Snapped that cable right in half. So she's on bed rest for 3 weeks and conveniently she's supposed to spend time in her kennel. Kinda handy because she's gonna get rest while we're driving.

We got our BCAA membership today just in case we need a tow somewhere. Hopefully we don't, but it's better safe than sorry. While we were in Courtenay we got gas. Holy smokes you wouldn't believe it but it's 99.9c per litre so 27 cents per litre cheaper than here, less than an hour away. There must be a gas war on. I told Steve that for his highway test drive we should go to Courtenay and then fill up the tank and the jerry cans too. The white van is already filled but that won't last long. We've got service calls in the morning, someone is looking at the trailer and then we're off to the court house in Nanaimo to file the last of the paperwork in preparation for going to court on Monday. Should be an interesting day on Monday. I'll tell you all about it once it's over and done with.

I'm off to bed now. The girls have day camp tomorrow so we'll have a few hours of girl free time. Yay! Should get more work done, and they'll have lots of fun at Milner Gardens. But more on that tomorrow.

Goodnight!
Posted by Elizabeth Faires at 3:07 AM