Things here are getting back to normal now that the torrential rains have abated for a few days. The water leverl has gone down so I can get all the boys smelly and gross camping gear washed. I'm actually soaking Chris' stuff right now with odour and stain remover. I finured I'd let it agitate for 10 minutes and then I set the timer on my washer for 6 hours so it'll be all finished by the time I get up and can hang it out to dry in the sn in the morning. I'm being optimistic about the sun, I know. But hey, it could happen!

Steve is wiring in the inverter. I'll have to get him to explain how it works but from what I understand it connects to a deep cycle battery and we can use it to run lights, the laptop and other things that don't use much power when we are not hooked up to shore power (an extension cord). The battery gets charged when we run the engine, and the inverter converts the power from 12v (battery) to 110 which is regular household power in North America.

He has figured out the problem with a lack of clearance between the trailer tyres and the frame. Originally there was less than 1/4 inch gap. He has bent the metal up and back a half inch so now there is more room, even if you put on a 14 inch tyre instead of a 13 inch one. We're looking at buying trailer tyres sometime this week, probably from Canadian Tire. We figure that since they are a hugely popular nationwide chain, if we have a problem with anything we buy there, we can get it replaced without too much hassle. 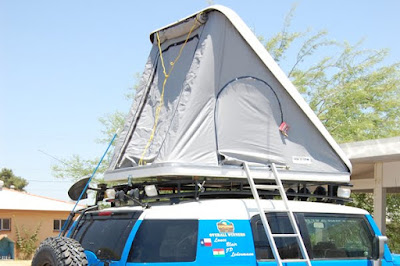 Our friend Dave who's staying with us for a few days is going to help me paint the trailer as soon as we get enough dry days. This will help to make it more watertight and durable. And then we'll proceed with or plans for a roof top tent something like this but permanently built onto the roof. It will have a low lip all the way around and canvas walls with some tent style windows and 2skylights in the wooden roof panel for ventilation. Having a good airflow is important because the canvas is waterproof and doesn't breath well so it could be like a little sweat box in there without some air flowing through.

Steve is working on all the mechanical details so I'm basically tasked with doing 2 things: 1. getting the paperwork all done for court next week and 2. Re-sorting and packing the stuff we're actually going to bring with us. Since our limit is 2000lbs and we have only a 7x11 trailer the capacity is 500 cubic feet, or in other words, one half of a storage locker. And we have 1 1/2 storage units as of today. Plus the stuff already in the trailer from the office. We have some food storage sold already and going this week plus a fridge going to a new home. I'm going to be donating a lot of stuff to the SOS (thrift store) or on Freecycle.

Our friend Hans Stussi is loaning us his 24 foot trailer so we have a place to work out of the weather to sort everything out and figure out the best way of packing things. Thanks Hans! He's a good friend and also the owner of Qualicum Bay Resort, the place we're having our Farewell BBQ on Saturday.

Speaking of the BBQ, WE MADE SAUSAGE!! It was lots of fun. Dave, myself and the 2 girls went because my husband was out of town camping with the boys. We went over to Trevor and Grant's Charcuterie in Dashwood, just north of Qualicum. They have it al professionally set up with heavy commercial mixing machines, stainless everything, it's beautiful! We found out as soon as we entered thatour camera was dead so no pics but here's basically what we did. We weighed the meat into 2 separate containers because we made 2 different recipes. We made a Toulouse sausage with pepper and garlic and a spicy Italian with chili's, nutmeg, garlic and lots of other good stuff. The big mixer mixed each batch together and the you put your sausage casings or skins onto a funnel. As the meat comes out of the machine through the funnel the casings feed off the outside of the funnel encasing the mix into one giant sausage. If you want links then you just twist it into links but we opted to just vacuum pack them as large coils. After all, it's easier that way and we can then but it up into however many pieces we want depending on what we're doing with the meat. I untangled and rinsed out the casings, Trevor ran the machine putting the meat into the casings, Dave measured out the spices, salt etc and helped Trevor. Kate ran the label machine and Meghan ran the vacuum packer. The girls helped to bag and label some back bacon and pork chops with Declyn for them to sell at the farmers market. After we had sausage ready, they bagged and sealed all of that too. They're so great! All the leftover bits of sausage meat got put into one bag and we ate it with pasta and tomato sauce...Delicious!

Hans dropped off his trailer for us to borrow at 10pm and stayed for a chat. He's loaned us his trailer for 10 days which should make sorting easier. It's 11pm so I'm thinking of heading to bed, as soon as Steve is done wiring some circuits in the fuse panel. It's very handy having an electrician for a husband!

Elizabeth
Posted by Elizabeth Faires at 3:00 AM